Even in the risky world of farming, a particularly nasty risk is Phytophthora, whose very name sounds scary.

A water-mold blight that can kill entire crops of pumpkins, cucumbers or peppers, Phytophthora capsici is especially problematic because once its spores get into soil, they remain there for years, dormant until the next heavy rains. (Unlike its more common cousin, late blight, capsici’s spores are transmitted by water, not wind.)

“It can take out 100 percent of their crop,” said Katie Campbell-Nelson, UMass Extension vegetable specialist. “There’s a few farmers around here who really specialize in butternut squash, and they’re at particular risk. This is a really big problem for them.” 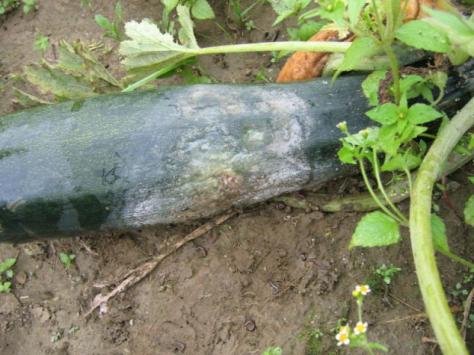 By all accounts, relatively dry conditions this spring and summer kept it from being a particularly bad Phytophthora year around the Pioneer Valley, but farmers such as Mike Wissemann in Sunderland and Peter Melnick in Deerfield reported losses this year.

“We’re running out of places. If you have the right weather conditions, it can rear its ugly head,” even a decade after a field was infected, said Melnick, who said his Bar-Way Farm lost about four of 10 acres planted in butternut squash, after the low-lying field got 4 or 5 inches during one warm September spell. “It’s getting to be a real challenge.”

That challenge is likely to become more intense, with good cropland limited and New England projected to become more susceptible to heavy rain events, with warmer temperatures because of climate change, according to Campbell-Nelson.

But one ray of hope could come from Campbell-Nelson’s test planting of “Caliente” brown mustard as a bio-fumigant cover crop at the UMass Crop Research and Education Farm in South Deerfield.

The brown mustard, chopped up and worked into the soil at the proper time, got the same reaction that Wasabi might draw from someone whose nose was “burned” by the release of the gas it generates, the researcher said with a laugh.

Her test this year of Brassica juncea mustard, measured against control plots of oats on infected soil in the greenhouse, showed it suppressed the disease.

“I got samples of Phytophthora that had been taken from fields around here,” she said. “There are several mating types, so I wanted to make sure we got a good sample of the disease we have in this area.”

Then she inoculated each pot with active “zoospores, which were swimming. If they had a host, they were going to find it. I was creating a disease triangle perfect for the disease: I flooded those peppers, I soaked them, I put the disease in there. I really wanted to see if I could kill those plants.”

The peppers eventually had fewer symptoms of the blight and lived longer, but Campbell-Nelson acknowledged that since it is harder under natural conditions to be certain the mustard is incorporated into the soil during active zoospore, or even semi-active sporangia cycles, it’s probably important to do repeated plantings.

Because the mustard cover — which has no commercial value, especially because it’s chopped into the soil — is from the same Brassica family as kale, it is unlikely to be used by diversified Pioneer Valley growers who want to rotate their fields to other kinds of crops.

And even with repeat cover-crop plantings, mustard is not likely to work wonders by itself, but should be seen as part of what Campbell-Nelson calls a “holistic solution” that also includes reduced tilling, well-drained soils, raised beds and rotating the Phytophthora-susceptible hosts with other crops.

Wissemann, one of a handful of area farmers who has tried using mustard as a bio-fumigant, reported after losing a pumpkin crop at his Warner Farm to the blight, “There’s no silver bullet, but it helps.”

He added, “We started swapping land with other farmers to prevent monoculture, but part of the risk of that was that Phytophthora ended up being transferred (by equipment moving from field to field.) This is all before we knew what we know now.”

And yet, he added, on a low-lying field that had once been used for growing peppers before it was inundated by the adjacent Connecticut River years ago, “We haven’t had susceptible crops on that field for, gosh, 15 years, and I put some pumpkin out there last year. And sure enough, they had a problem.”

Another recent UMass Extension research project, by plant pathologist Nicholas Brazee, tested for Phytophthora spores in the Connecticut, but found that no samples of that variety, leading to the conclusion that it only spreads the blight if it carries water over already infected soil onto another field.

In some cases, Wissemann and Melnick agreed, the pumpkins had been harvested several days before they showed signs of the disease.

Angela Madeiras, a diagnostician at the UMass Plant Diagnostic Laboratory, said that in addition to flooding of infected fields with poorly draining soil, a leading way Phytophthora spreads is by workers carrying infected soil on their boots, or on farm equipment.

But she added that it is unclear where the problem, which exists in other parts of the world, came from, or how much of Pioneer Valley farmland is affected.

“It’s hard to know how widespread it really is,” Campbell-Nelson said. “It’s like finding a needle in a haystack, because it only presents itself when there’s a flood … condition.”

She added, “Farmers who have had trouble with this disease have gone as far as suggesting they grow cucumbers on trellises, even though that’s on acres and acres, because they’re so at a loss for what to do.”

Even then, added Madeiras, the spores can be splashed up onto the crop by rain. Chemical fumigants exist, but they tend to be expensive and harder and harder to find.

The good news is that practices like using mustard as a cover crop, rotating crops, increasing soil drainage, and reducing tillage can help somewhat, Campbell-Nelson said.