Creating vibrant public spaces is no easy matter. Parks and other such places require a serendipitous combination of scale, public access and visual appeal to make them come alive.

As Jane Jacobs, the 20th-century journalist and urban theorist who championed city street life, wrote in her highly acclaimed “The Death and Life of Great American Cities” (1961), “The more successfully a city mingles everyday diversity of uses and users in its everyday streets, the more successfully, casually (and economically) its people thereby enliven and support well-located parks.”

Local Harmony, a Pioneer Valley-based non-profit organization, is creating an intimate stone amphitheater and medicinal garden on the small, grassy hillside owned by Smith College that runs from the Hungry Ghost Bakery to State Street in Northampton. Jacobs would undoubtedly give Local Harmony two thumbs up.

Local Harmony is the collaborative creation of Owen Wormser, owner of the Leverett-based landscape design company Abound Design, and Chris Marano, an herbalist who owns Clearpath Herbals in Montague (and teaches at the UMass Stockbridge School of Agriculture). Wormser said the organization’s goal is “to harness the skills of professional landscape designers, horticulturalists and gardeners to join forces with volunteers to create beautiful and accessible public spaces.”

Wormser, a landscape designer who is trained in architecture, said the idea for Local Harmony originated in a project he undertook several years ago. After launching his landscape design firm, Abound, he created the public fountain space at Cooper’s Corner store in Florence as a promotion for his fledgling business.

“I found it was really meaningful for people,” he said. “Cooper’s Corner was very successful in terms of people wanting to use the space. People are very appreciative of it. They take pride in their surroundings.”

After Cooper’s Corner, Wormser kept his eye out for other spaces. 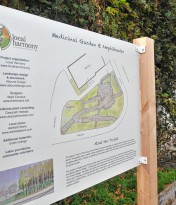 “You need to have sympathetic property owners, and I figured that Smith College and the Hungry Ghost Bakery would be supportive,” he said.

Local Harmony’s garden will have a variety of uses. It will be a place for educational activities and performances as well as a pleasant space for the public, including patrons of the bakery, which overlooks the garden.

“We want this to resonate with the public so they feel it’s theirs and that they want to be part of it,”Wormser said.

Among its functions will be that of a teaching garden; it will be composed only of medicinal plants. Marano called it a “sister garden” to a similar one at Clearpath Herbals in Montague. But the plants also have been chosen for their aesthetic appeal.

“People who don’t know anything about medicinal plants will still find it beautiful,” Wormser said. The herbal plants include commonly known varieties such as catmint (Nepeta) and coneflower (Echinacea) and others including Balloon Flower (Platycodon grandiflorus) and Yarrow (Achillea millefolium). Taller perennials will be placed along the border to create a sense of seclusion for the garden.

In addition to the medicinal perennials, the garden will include a border of serviceberry trees (Amelanchier) along the edge where Bedford Terrace curves into State Street. Serviceberry, also known as shadbush or shadblow, is a small tree that’s well-suited to the garden. It has delicate white blossoms in spring and colorful fall foliage, it’s drought tolerant and attracts birds.

According to Wormser, Smith College, which owns the property, has provided generous funding for the project.

“Smith and Roger Mosier, the college’s associate vice president of facilities management, understand that this was an extremely valuable offer and that Smith, the Hungry Ghost and the entire community will gain from it, Wormser said. “The project wouldn’t happen without Smith’s level of support.”

The Hungry Ghost Bakery also has donated to the project, and will take on a major role in maintaining the garden.

In his role as owner of Abound Design, Wormser provided the professional landscape design, while Marano of Clearpath Herbals has provided expertise and advice about suitable medicinal plants for the garden beds. Ashfield Stone donated the Goshen stone for the amphitheater and pathways. Local Harmony will provide plants and materials at cost. Wormser estimates that $40,000 has been contributed to the project in terms of materials, time and labor. He noted that this is less than half what such a project would cost on the open market.

Another cost-cutting feature of the project is that, with the exception of some of the stonework, volunteers will install it. Wormser projects that between 400 and 600 hours of work will be donated in total.

“We have a large population of younger people in the Valley who want to work, grow food and gardens,” he said.

Kevin Potter, 27, was one of the volunteers who helped excavate the site when the project broke ground Oct. 17. He has worked for Abound and studies herbalism with Marano at Clearpath Herbals.

“I’m excited about the opportunity to create a high-visibility community garden,” he said. “It’s huge to have a place to plant herbs and learn about them. It’s a great resource for people. And it’s accessible by foot and by public transportation.”

Wormser and Marano say they plan to have 70 percent of the plants in place this fall, with the remainder to be planted next spring.

“Once it’s completed and the plants are growing, it will feel enclosed with color and texture,” Wormser said. “It will feel like a sanctuary.”

Wormser said he is pleased with the garden’s size and location.

“It’s just manageable. We are able to do most of the work by hand,” he said. It’s not exactly in the middle of the city; it’s a little quieter here. It’s a good spot to watch the city go by.”

The State Street garden is one of several Local Harmony initiatives. The non-profit recently renovated five large concrete planters in downtown Turners Falls, with help from students at the Franklin County Technical School. Local Harmony is also working with the Hitchcock Center for the Environment in Amherst to create an extensive teaching garden that will be installed next spring at the center’s new site on the Hampshire College campus.

“We went through a great design process with Local Harmony that involved thorough thinking about all aspects of the project, including community collaboration, accessibility and the teaching function,” said Casey Beebe, community programs and special projects manager at the Hitchcock Center.

“I want people to come here and say, ‘I could do that,’ because anyone can do this,” he said. “I want this to be a model that’s sustainable over time and that can work in any community.”

Inspiration is an important part of the work, he added.

“Our long-term goal is to remind people that our planet is a garden and we’ve wrecked it. But that we can rejuvenate it, make it beautiful and productive again for all living things.”

Mickey Rathbun can be reached at foxglover8@gmail.com