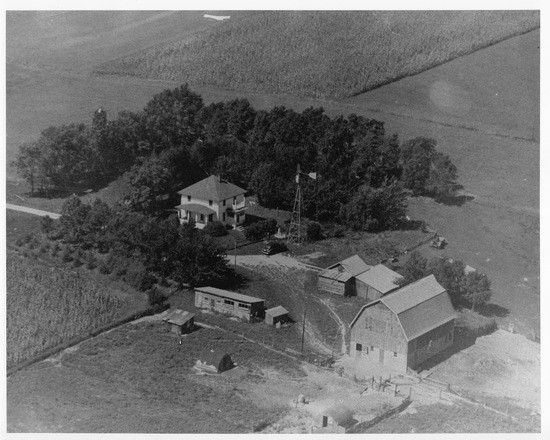 The photo above is of the Andersen family farm in Chatfield, Minnesota. It’s a farm that only exists in the memories of my brother, sister, and my cousins, as it had ceased

operations by the time I was born. My dad would tell stories of moving from a 40-acre farm during the Great Depression to the one pictured above, which was an 80-acre farm. My grandfather never used a tractor. He farmed that 80 acres with the help a team of horses.

It was on this farm that my dad spent his childhood raising pigs and sheep to take to market. He was up before dawn to milk cows before he walked several miles to the one-room school house he attended. The farm was the center of family life. While researching this I found the newspaper in Chatfield would report on who visited who, and who had visitors, and what they did. The Andersen family farm was at the center of much of the activity in the small town.

Today, the old family farm is part of a larger farm. The farmhouse, barn, and outbuildings are either falling over or gone. The story of my family’s farm is one that isn’t much different than other family farms of the post-World War II era. In my family’s case, my dad and uncles had gone to war, and the last thing they wanted to do when they came home was farm. When my grandfather passed away my grandmother kept it going with hired hands. But when she passed away a few months after I was born, the farm was sold. In other cases, family farms were lost due to a couple bad growing seasons, or low grain and milk prices. As the number of farms shrank, the acreage per farm grew considerably larger.

The number of farms in the country has fallen by some 4 million between then and now — from more than 6 million in 1935 to roughly 2 million in 2012. Meanwhile, the average farm size has more than doubled, and the amount of total land being farmed has, more or less, remained the same.

Walmart has built a dairy processing plant in Indiana. What this will do is force milk that’s bound for existing dairies to take a detour through Walmart’s plant, which hurts smaller operations and farmer owned co-ops. This will likely drive more small farms out of business as ever-larger mega-farms vie for Walmart’s business, and the only way to get that business is to sell at ever lower prices. The only way to do that is economy of scale: larger and larger farms, with automation.

My grandfather knew the names of all of the cows he owned. Today, the average number of cows on a Wisconsin dairy farm is 134. The S&S Jerseyland dairy in Door County has a herd of 6,400 cows. They have recently applied for a permit to increase the herd to 10,000 head. I am guessing they don’t name their animals.

In a blog post called “The Last Milking,” the events and decisions that led up to that day are detailed: How a fourth-generation farm could no longer go on, because it just was not economically viable.

Every year, milk prices fell faster and faster.  We tried to ride out the tide.  Some years were good, others were hard.  Very hard.  There were years milk prices dropped below what his Dad had been getting paid for milk in the 80s, and we wondered how much longer we could hold on.  Coming to a fork in the road.  Do we go bigger, or do we sell out of this vision of being a small dairy farm in Western Wisconsin.  Trust me, this decision isn’t one we took lightly.  In fact, making this decision felt like a tug of war between what our hearts said, and what the bank account said.  This decision was a gut-wrenching feeling knowing we would be giving up on the only dream Weston had envisioned his entire life.

The choice the family that owns Patnode Lane Holsteins was faced with: go into debt for generations to increase the size of a fourth-generation family farm, or shut it down. They went with the only real viable option—closing down operations.

We are losing a part of America with the loss of these smaller farms. The photo on the left was taken on the family farm in 1931. There is really nothing special about this photo to anyone but my siblings and cousins.

It is of our grandfather, two uncles, and our father. But there are millions of photos like this out there—of a different time, a different world. In 1931, the United States was nearing the peak number of farms. With the end of World War II we would see a shift. Farmers like my grandfather, who only used horses were being passed by bigger farms using less manpower. Efficiency became the mantra of the American farmer. Eighty-acre farms like ours were bought up and folded into ever larger farms.

What we have gained in efficiency we may have lost in our souls. That 10,000-head dairy farm won’t have a Sadie, Daisy, or Beauty. It is unlikely that a teenager will be out milking cows with his dad at the crack of dawn before going to school.

The price of progress must always be paid. As the United States has grown to be more of an urban nation instead of an agrarian nation, we have lost something. At some point in the near future, you will not see the iconic red barns with the blue “Harvestore” silos dotting the Midwestern countryside. They will be nothing more than a memory.

While modern farming can feed more and more people with fewer farms and farmers, it all comes at a price. I still remember visiting farms in my dad’s hometown as a child and seeing how sad he was when he went to the ruins of the farm he grew up on. Once these farms are gone, our country is unlikely to get them back.