“I went to see the gorillas in the Congo,” Mr. Adams, 42, recalled recently. But he left his tour group and ended up meeting Rosette, who was working at a hostel where he stayed.

Today, the couple are trying to grow a business cultivating crops on suburban lawns on Long Island. Their business, Lawn Island Farms, is the result of research and a desire to find a way to farm on the island.

“A lot of it was seeing America through Rosette’s eyes,” Mr. Adams said. In his wife’s hometown, he added, “all their food comes from within miles.”

With lots of ideas and little money, the Adamses began looking for land to farm. They started an online fund-raiser and posted fliers asking area residents to consider turning their lawns into small farms.

“There’s definitely an interest,” Mr. Adams said. “People say, like, ‘How do we replace the lawn and make it into a productive system?’”

The Adamses have received more inquiries than they can handle.

For now, the couple is farming at two locations in Bay Shore: one is a homeowner’s front lawn; the other is behind St. Peter’s by-the-Sea Episcopal Church.

They sent the additional inquiries they received to Pennie Schwartz, a home-farmer in Southold, farther east on Long Island.

Ms. Schwartz, 61, a retired chiropractor, said she wanted to help the Adamses turn each inquirer’s lawn into “an edible space.”

“It’s called foodscaping,” she said. “It’s really getting people to understand that lawns are really environmental energy suckers, for lack of a better word.”

Ms. Schwartz studies permaculture, a phenomenon that she said “combines landscape design with sustainability and environmental ecology” — and holds a certificate from Cornell.

“I don’t want to put the lawn guys out of business,” she said. But, “with all the chemicals that go into it, and all the watering we have to do to keep it green, there are better ways and better things to do.”

Ms. Schwartz wants to set up systems that landowners can maintain independently; each system should meet the landowner’s needs.

In other words, a family with children can still have a swing set.

On the two properties they farm, Mr. and Mrs. Adams are cultivating crops that grow quickly and that do not require much space, like salad greens and radishes.

One evening last month, the Adamses’ 9-year-old twins, Daisy and Curtis, ran through the front yard farm here on Hyman Street in pursuit of a rabbit. 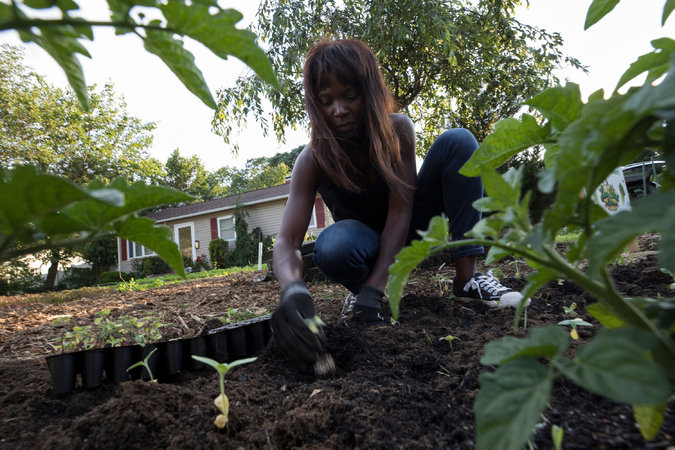 Ms. Adams planting sunflowers in Ms. Trimarco’s lawn. Ms. Adams grew up in Kasese, Uganda, a town, she said, where “everything we ate, we grew.” CreditJames Estrin/The New York Times

Mr. and Mrs. Adams had just planted sunflowers when the homeowner, Cassandra Trimarco, drove up.

Ms. Trimarco, a physician assistant, contacted the Adamses after noticing their flier at a coffee shop.

“It’s me kind of donating in a way rather than controlling, because I don’t control anything, and it’s wonderful,” she said. “They think they’re lucky, but I think I’m lucky.”