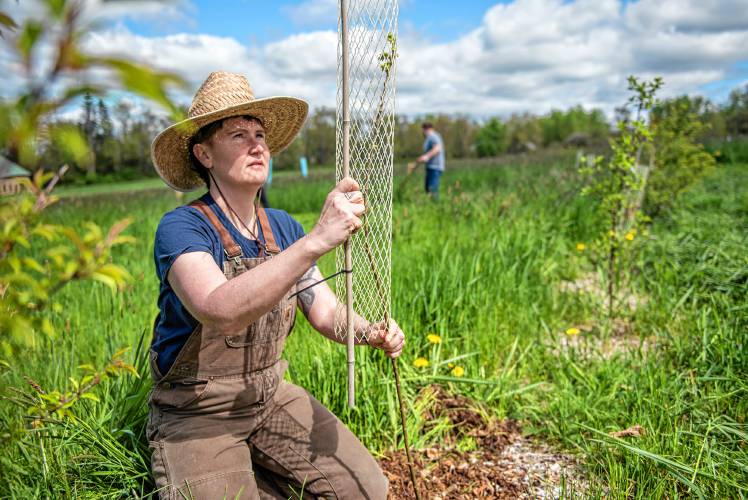 Original Gazette article can be found here by Rema Boscov

It doesn’t look like it could save the planet — long grass dotted with 4-foot high chestnut trees, inch-thick trunks with a few broad leaves on short, thin branches, surrounded by plastic mesh tubes to protect them from the sheep not yet here. But it’s what you don’t see on Lisa DePiano’s research plot that gives hope. There’s carbon, lots of it, pulled from CO2 in the atmosphere, now sequestered in the soil — with more to come, explains DePiano, a Sustainable Food and Farming lecturer at the University of Massachusetts’s Stockbridge School of Agriculture.

This farming method, called silvopasture, is an adaptation of a very old agricultural practice, grazing livestock in forests. It’s one of many forms of regenerative agriculture, also called carbon farming, and the benefits are astonishing. A third of the carbon dioxide in our atmosphere has been released through deforestation and agricultural practices such as plowing and using synthetic herbicides, pesticides and fertilizers. But plants can reverse that if we let them. They take in carbon dioxide, and by photosynthesizing, send the carbon down through their roots as sugars, where living organisms such as arthropods, nematodes, fungi, protozoa and bacteria turn it into stored carbon. Tilling, or plowing, exposes the carbon to air, where it unites with oxygen to become CO2, and turns up the soil organisms, killing them.

An amazing story happens beneath our feet. Bacteria and fungi play a crucial role, combining minerals found in rocks, clay and sand with the carbon in the sugars, creating pea-sized aggregates, multi-surfaced lumps with spaces between them. Those spaces act as a sponge, holding water in times of drought and preventing runoff and erosion in times of heavy rain. If the soil isn’t tilled or saturated with synthetic chemicals, retaining its living organisms and its structure, tons of carbon can remain there, for centuries.

Scientists indicate that, in addition to cutting carbon emissions, afforestation and widespread application of carbon farming techniques could dramatically slow and even reverse global warming. After the oceans, soil is the next best carbon sink. And it’s happening here now.

Silvopasture isn’t just grazing livestock among trees. Using electronic mobile fencing, farmers move their animals from one area to another, sometimes every day or two, to avoid compacting the soil, causing erosion, damaging surface roots and trees, and eating the grasses and pasture plants too close to the soil, killing them. Plants need time to regrow, and as they do, they continue to photosynthesize, sequestering more carbon and increasing soil fertility and water retention. Rotational grazing mimics the movement of wild herds, closely grouped for protection, nibbling, leaving their valuable waste, and moving on. If bare soil shows through, it’s past time to move the livestock.

Both the animals and the soil benefit. In mixed pastures of trees, grass and other plants, animals choose the forage their bodies require, reducing disease and parasites. Shade in summer reduces stress leading to greater weight gain and increased milk production.

But wait! What about methane and nitrous oxide that ruminants emit, greenhouse gases far more potent than carbon dioxide? Can silvopasture sequester enough carbon to offset methane emissions? Yes, by a lot. Project Drawdown, an analysis of 80 climate change mitigation solutions, lists silvopasture 9th, with carbon sequestration rates much higher than all other carbon-farming techniques. The United Nations Intergovernmental Panel on Climate Change and other scientists concur. The figures vary. Pasture situations differ, yearly rates fluctuate, and carbon sequestration reaches a saturation point. But researchers agree that silvopasture sequesters carbon up to three times faster than other managed grazing systems, averaging three tons per hectare per year (about 1.2 tons/acre), with a maximum lifetime carbon stock from 60 to 250 tons/hectare (about 100 tons/acre).

“We’re showcasing this technique,” explains Lisa DePiano, standing in her research plot of one-stemmed chestnuts at UMass, where, minutes before, students gathered, looking and listening. “We’re training the next generation of farmers and giving presentations to people interested in ways we can grow food to mitigate climate change.”

Chestnut trees, once prevalent here before the fungal blight in the early 1900s, could be an ideal silvopasture food crop. The small blight-resistant Chinese chestnuts in DePiano’s plot should yield nuts in five to six years. While waiting for an investment to pay off, berries and other carbon-sequestering perennial crops can grow between the trees. “We are trialing it out for farmers to risk a different method of growing,” DePiano says.

From his orchard on a steeply sloping hill in North Hadley, Jonathan Carr looks across the Connecticut River to Mt. Sugarloaf. That’s what his sheep and goats would see if they looked up from the pasture under his chestnut and apple trees.

Carr and his wife, Nicole Blum own Carr’s Cider House. They grow old-fashioned “high-headed trees,” Carr says. “It doesn’t matter if the apples are up in the air. We don’t spray. We’ve selected traditional varieties that have natural resistance. And we are exploring modern varieties bred for that purpose. Apples have their own special tannins, a natural pest deterrent and anti-fungal.”

Steep slopes like Carr’s, inappropriate for annual vegetable crops, are ideal for silvopasture. Carr slides a bundle of young chestnut trees from a long cardboard box, digs three holes, divides the bunch into thirds, and shovels soil over them, heeling them in. He will plant these and other trees — persimmons, Japanese walnut and heartnuts, which taste like a hickory and pecan hybrid. Fortunately, deer and rabbits dislike their leaves. “We have a lot of wildlife here,” he says, pointing to deer-nipped tips of low-lying apple branches. “Chestnuts are not preferential browse. There are so many yummy apples here to eat.” And the chestnuts, which bloom later than apples, won’t be affected by late frost that can kill early apple blossoms. That happened twice in Carr’s orchard. “It decimated our crop,” he says.

But Carr is thinking long-term. “This is a farm experiment. Our planetary food system is on the brink of crisis. It feels important to bring attention to ways of farming that we have to figure out in short order. We have to get down to one-fourth the fossil fuel. If we’re grazing, I’m not on a tractor mowing, burning diesel.”

In a very different setting, Jono Neiger walks through his flat seven acres bordering the Connecticut River, suitable for another kind of silvopasture. At Big River Chestnuts in Sunderland, he has recently installed chickens in mobile coops between rows of young chestnuts, partly to increase soil fertility on this land depleted by conventional farming. “We’ll run the chickens down the alleys,” he says. Plants adding organic matter, and chickens adding manure, “scratching and aerating, could create soil with lots of life in it.”

Neiger, a principal designer at Regenerative Design Group, indicates sections for planting new crops and points to established perennials–elderberry, persimmons, pawpaws, basket willow, and berries, “crops we can grow while the chestnuts are growing,” he says, “to show how to make it economical for people.” Why? “This soil has 2 percent organic matter. It could be 5 to 8 percent. Every 1 percent increase in soil organic matter sequesters 21 tons of carbon per hectare,” about 8 tons per acre. And the improved soil quality and structure “holds and filters water so it will go to the river clean. Farmers will see that management won’t be as intensive. If the land has more fertility it’s more profitable. We need to make these changes. We shouldn’t be buying vegetables from California and Chestnuts from Italy.” He hopes “some farmer whose land is worn out or steep might say, ‘I’m gonna plant tree crops for my grandchild.’”

Mark Fraser, in Montague, created a silvopasture from a forest already there, partly because he loves seeing animals among large trees in pasture. “I started thinning mostly firewood trees,” he says. “The trees I can’t burn, white pine and poplar, I drop and cut into pieces I can move by hand.” He has placed those logs on a rock ledge where “it’ll be the next generation before it becomes soil.” He then limed and planted a pasture mix specifically for wet soil. He rotates sheep, goats and cattle every couple days on his silvopasture and two leased pastures. “The goats eat bittersweet, poison ivy, multiflora rose, barberry, grapevine. Goats are wonderful browsers!” he says. “The systematic defoliation eventually kills the plant. Japanese knotweed is the exception. It makes great goat feed because it’s always coming up.”

With our changing climate, “silvopasture is good for wet weather and drought,” Fraser says. He began creating his silvopasture in 2011. It took only a short time for the soil to become nutrient-rich and able to retain water. In 2016, a dry summer, “my land was much greener than anyone else’s.”

And what about the beauty of the large trees, animals beneath them? “You would not believe how many people stop to look at the animals,” he says. “If nothing else, it makes people happy. It gives them a connection to the land.”

In Amherst, Jeremy Barker Plotkin, co-owner with Dave Tepfer of Simple Gifts Farm CSA, walks down the farm road, past a greenhouse, a field of raspberry canes, and open pasture. “We’re looking at reducing tillage,” he says. To do that, “one-fourth of the land per year goes into pasture.” Each plot taken temporarily out of vegetable production becomes grass and clover for chickens and pigs. The farm’s topsoil is “loamy sand, not a sandy loam,” he says. “Pasturing has improved the soil a lot.”

“We move animals around faster in May and June if you want to get them everywhere,” he says. “We let them munch a little bit. We plant cover crops animals eat.” The Simple Gifts farm store sells pork and beef grown here, and chicken and lamb from friends.

Barker Plotkin and Tepfer haven’t planted trees yet. “We’re looking for crops, maybe nuts and berries, that have a similar production in dollars per acre. Not every farmer can do this. It’s about our philosophical outlook. The reason we farm is to do things like this.”

Lisa DePiano’s research provides a start. “Farmers don’t make a lot of money and they work hard. It’s a risk for them to change. We really need funding from policymakers,” she says. “We’ve given tours to state representatives and senators.” She’s hoping people will “pressure their politicians to incorporate bills to support regenerative farming. We need to move quickly,” she says.

Connor Stedman, a Hatfield-based consultant dealing with the business, practical and environmental aspects of farming, does “a lot of public and industry education around climate change,” he says. When people ask, “What can I do?” he asks them, “What is your situation in life, your sphere of influence?” Each person has a unique opportunity, he believes. “A lot has to do with organizing, figuring out how to build coalitions together.”

Russell Wallack of Amherst, owner of Breadtree Farms, doesn’t in fact have a farm. But he has chestnut trees to sell to silovpasturists because a friend offered him a quarter acre in Leverett on which he has planted 700 seedlings, a foot apart. That’s working together.

And according to Eric Toensmeier, Yale lecturer, author of The Carbon Farming Solution, and senior researcher at Project Drawdown, “We can bring atmospheric carbon dioxide back to 350 ppm if civilization decides to take it seriously. We just have to want to do it enough.”

Rema Boscov has been an Artist-in-Residence at three U.S. National Parks and has written for Hampshire Life, The Washington Post and the Boston Globe. She lives in Leverett.

One thought on “LISA DEPIANO, UMASS SFF Faculty featured on cover of local story about silvopasture”