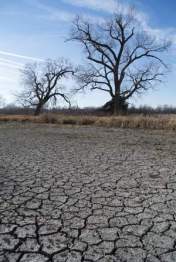 The merciless drought that has scorched much of the central U.S. this year shows no signs of letting up, according to the most recent forecast from NOAA’s Climate Prediction Center.

For a massive portion of the nation — in almost every state west of the Mississippi River — drought is forecast to continue throughout the next several months: “The drought is likely to persist through the winter,” reported Weather Underground meteorologist Jeff Masters.

Beyond the winter, the forecast gets murky. “We’re expecting persistence of the drought through the winter months and through early spring, and with the climate signals being relatively weak … it’s very difficult to really say how the spring will materialize with regard to the drought outlook,” said Jon Gottschalck, a meteorologist with the Climate Prediction Center.

The area currently in a drought expanded slightly this week after a few weeks of improvement.

According to Wednesday’s U.S. Drought Monitor, a weekly federal report that tracks drought across the nation, the percentage of the U.S. enduring drought conditions worsened slightly from the week before, from 58.8% to 60.1%. This is the first time in five weeks that the national percentage went up.

Parts of every state west of the Mississippi, except for soggy Washington state, are seeing some level of drought conditions. Six states — Oklahoma, Kansas, Nebraska, South Dakota, Colorado and Iowa — are entirely in a drought.

Farmers in the Plains are coping the best they can. Gregg Ode, who farms near Brandon, S.D., said he has done what he can and has secured his feed for the winter, spring and part of next summer.

“We just hope that Mother Nature will bless us with some rains in the spring when we get the crops put in,” Ode said. “We had a guy come in with an excavator to dig some holes, and 8 feet down, it’s nothing but powder.”

Amazingly, even with the colossal devastation from Superstorm Sandy in the Northeast, it’s the drought that could do the most damage to the U.S. economy. “Sandy’s damages of perhaps $50 billion will likely be overshadowed by the huge costs of the great drought of 2012,” Masters reported.

Masters said that it will be several months before the costs of America’s worst drought since 1954 are known. However, the 2012 drought is expected to cut the nation’s gross domestic product by 0.5-1 percentage points, Deutsche Bank Securities told Bloomberg News this week.

In order for parts of Oklahoma and Arkansas to come out of their drought, they would need more than a foot of rain, according to the Climate Prediction Center.

So far this year, Nebraska and Wyoming are enduring their driest year on record, according to the National Climatic Data Center.