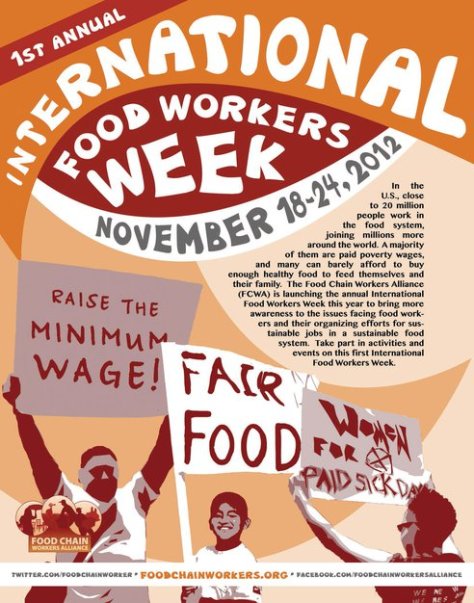 The most under-reported  and neglected aspect of the good food movement is the 20 million workers who toil every day—often under inhumane conditions—harvesting fields, killing and cutting up animals, packing boxes, driving trucks, cooking meals, ringing up orders, serving tables, and cleaning up the mess. Recognizing this reality is the idea behind International Food Workers Week hosted by the Food Chain Workers Alliance, during which numerous actions are being held, including solidarity with the striking Walmart workers planned for Black Friday.

While foodies debate the merits of buying heritage turkeys versus going meatless for Thanksgiving, millions of food workers are struggling to eat at all. The word ironic doesn’t even begin to describe the injustice. A shameful 40 percent (8 million) of all food workers currently earn the minimum wage. And partly because that wage is set so low, an incredible 10 million food workers (half of the total 20 million) earn below the poverty line for a family of three. Adding to the irony? The feds are picking up the slack with food assistance programs. Food workers participate in food stamps at 1.2 times the rate of others. Also, food workers are more likely receive Medicaid and those lacking health benefits often use emergency rooms for primary care.

So groups are organizing to support the federal Fair Minimum Wage Act, recently introduced by Representative George Miller of California in the House, and by Senator Tom Harkin in the Senate. The bill would raise the federal minimum wage from $7.25 to $9.80 per hour over the next three years, and the tipped minimum wage from the current $2.13 to 70 percent of the regular minimum wage.

Yes, you read that right. As low as the regular minimum wage is, I was shocked to learn about the tipped minimum wage. Obviously, the restaurant industry has extremely powerful lobbyists. In the past, tipped wages were indexed to 60 percent of the regular minimum wage so that when one rose, the other would too. Congress unlinked tipped wages from non-tipped wages in 1996, due to lobbying efforts of the National Restaurant Association. As a result, the federal tipped wage has stayed at $2.13 for the last 21 years. That’s worth repeating. The minimum wage for tipped workers has stagnated at just over two bucks for more than two decades, even while the regular minimum has gone up. (Some states have higher tipped minimum wages and others don’t distinguish between the two.) This affects a lot of workers, most of them women, which means families. Of the 10 million workers in the restaurant industry, 872,500 are tipped workers and 75 percent of those are women, according to researchers.

One of industry’s favorite talking points against raising the minimum wage is that food prices would necessary go up. (Such scare tactics are quite effective.) Instead of relying on self-serving and unsubstantiated claims, two labor experts at the University of California (Berkeley and Davis) decided to take a scientific approach. Their report, called A Dime a Day and released last month by the Food Chain Workers Alliance, came to an important if not surprising conclusion: industry is exaggerating.

The study estimated the impact the Miller-Harkin proposed minimum wage increase would have on food prices. Researchers found prices would increase by less than one percent cumulatively over three years at food retail outlets, and 2.25 percent cumulatively over three years at restaurants. (The study assumes employers would pass 100 percent of the wage increase onto consumers, a conservative approach.)

This translates to an average household paying less than 10 cents a day as a result of the minimum wage increase. Why so low? One reason is that only one percent of restaurant payrolls go to minimum wage workers. Also, food prices are kept artificially low due to government subsidies of commodity crops.

However, farm labor is exempt from minimum wage requirements (thanks to more powerful lobbying) so this bill won’t help most farm workers. (The report predicts that some “crop production” workers will benefit both directly and indirectly.) Still, if the bill passes, it would mean an important step towards significant food system change for many workers. The minimum wage increase is one of eight policy initiatives recommended in the Food Chain Workers Alliance “The Hands That Feed Us” report.

If the food movement and public health advocates are serious about improving food quality, they have to stop leaving 20 million workers out of the picture. It’s time to broaden the agenda to include those on the front lines of the broken food system. This holiday season, please support the Food Chain Workers Alliance and other related groups, such as ROC-United, which focuses on restaurant workers. And next time you eat out, help counter the power of the National Restaurant Association by leaving a bigger tip.

Thanks to Anisha Hingorani for assistance with this article.

One thought on “Did you eat today – thank a food worker”