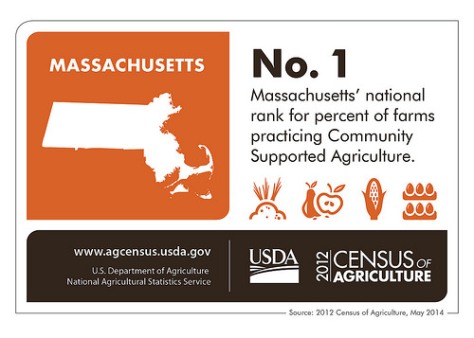 The Census of Agriculture is the most complete account of U.S. farms and ranches and the people who operate them. Every Thursday USDA’s National Agricultural Statistics Service will highlight new Census data and the power of the information to shape the future of American agriculture.

Massachusetts’s agriculture has developed to meet the needs the needs of metropolitan area that stretches from Boston to New York City. To meet the needs of East Coast home owners and landscapers, in 2012, 1,039 of Massachusetts’s nurseries, greenhouses, floriculture, and sod farms grew and sold over $144 million worth of those crops. Sales of these crops accounted for almost 30 percent of agriculture sales.  Also, 1,223 farms produced just over $125 million of fruits, nuts, and berries. Our state ranks eighth in berry acreage in the nation, at 15,727 acres, and 89 percent of that is dedicated to what many consider to be Massachusetts’s signature crop, the cranberry. Massachusetts is the birthplace of the cranberry industry and currently has the second highest cranberry acreage in the nation, at 14,070 acres.

But what makes Massachusetts agriculture particularly unique is our direct- to-consumer sales, direct sales to retail outlets (such as stores, restaurants, and institutions), and community supported agriculture (CSA) arrangements. More than 28 percent of the Bay State operations engage in direct market sales, and our state ranks third in the nation for value of direct market sales per operation. In addition, Worcester and Middlesex counties are in the top ten counties nationwide for value of direct market sales. Over 13 percent of our sold to retail outlets which ranks 6th nationally.  CSA arrangements are also very prevalent in our farming industry. In fact, nearly six percent of farms in our state market products through a CSA arrangement, up from three percent in 2007. We rank sixth nationally for number of farms and first nationally by percent of farms using CSA arrangements. In addition, four Massachusetts counties – Middlesex, Hampshire, Worcester, and Franklin – rank in the top 10 nationwide for number of CSA arrangements.

As you can see, Massachusetts agriculture stands out in multiple ways, and it’s clear that we will remain unique and continue to grow.

If you want to learn how to get involved in agriculture in Massachusetts, you might be interested in the B.S. degree or the ONLINE Certificate in Sustainable Food and Farming offered by the University of Massachusetts Amherst.  Or at least, stay connected with whats happening at Just Food Now in Western Massachusetts.