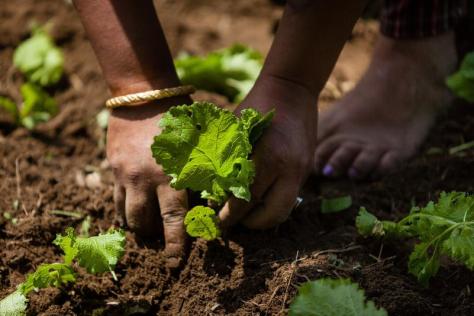 When buying tomatoes or lettuce, there’s so much to consider: freshness, price, taste, farming practices — and fairness.

With a resurgence of interest in Pioneer Valley agriculture, some advocates have begun to look for ways to make sure that workers at farms are treated fairly, with livable working conditions, and that food co-ops and farm-product businesses do the same to their employees and farm suppliers.

The Agricultural Justice Project — with roots going back more than a dozen years in Florida, North Carolina, New Jersey and New York, and overseas — has been reaching out more recently to farmers in this region as well.

Looking at “Food Justice Certification” is an outgrowth of the organic certification effort that Portia Weiskel says she and other growers were involved in with formation of the Northeast Organic Farmers Association decades ago. But when federal organic standards were adopted, the “fairness” principle that was part of the original concept for organic was forgotten.

According to Elizabeth Henderson, the Northeast Organic Farmers Association representative on the Justice Project’s management committee, that meant “fairness to people who work in agriculture, fair pricing for farmers, fair treatment for farmworkers and fairness to animals and fairness to all creatures. The creatures got into the national organic program, but the people didn’t.”

Weiskel added, “It’s attempting to say the principles that apply (to how food is grown) also need to work on a larger scale, including people working on farms. This is taking in the whole system, this group of people trying to get social justice, earth justice and food justice.”

Weiskel — who runs a one-woman, five-acre farm that produces eggs, kale, rhubarb and raspberries — and farmer Jon Magee of Greenfield began approaching area farms this winter, along with food co-ops and food-product manufacturers.

After helping edit an international food justice document a couple of years ago, Weiskel said she volunteered to work on approaching Franklin County farmers to gauge their level of interest on working toward certification standards, such as “farmer provides at least one day of rest out of every seven,” “regular and timely payments” and “clear multi-step conflict resolution process with no retaliation.”

Many of the standards, Weiskel said, are probably already being met.

“Some of these people are operating on a shoestring, and a lot don’t have any employees,” acknowledged Weiskel. “If I had to pay anybody here, I couldn’t do it.”

Most of the farmers and the co-ops she and Magee have approached have been open to the idea, although one told her, simply, “I can’t fill out any more paperwork.”

Admittedly, this is the busiest time of year for many farmers to be approached — especially with the idea of adding another chore to their load and the expense of certification fees.

Yet, Magee said, “It seems everyone is interested in knowing more. Most are cautious because they perceive more of a managerial burden. … In the Pioneer Valley, no one has anything against farmworkers and people are fairly fond of their farms.”

Even for farmers who do not become certified, he said, many seem interested in having a conversation about issues like spelling out a clear conflict resolution process, having defined policies about sickness and maternity or paternity benefits, or health and safety protections.

“It’s a chance to bring agricultural justice to the table,” said Magee.

At Red Fire Farm in Montague, Ryan and Sarah Voiland said they are committed to trying to improve pay and conditions for their workers who number between 60 to 80 at the peak of the growing season between their Montague and Granby farms. And they said they are willing to look at the specific standards of the project, for which the Pioneer Valley Workers Center at the University of Massachusetts would be the independent certifying agent.

At the same time, Ryan Voiland said, “We feel we’re stuck between what consumers are willing to pay for their produce and what we’re able to pay our workers,” while at the same time being asked to donate food under the banner of “food justice” to the Food Bank of Western Massachusetts.

“We try to think about the right way to do things, and to make it viable for the people who work for us. And we’re in favor of having a just workplace and strive toward that,” he said. “But I’m not super-excited about having another set of forms to fill out.”

Philip Korman, executive director of Community Involved in Sustaining Agriculture in South Deerfield, agreed that many local farmers care deeply about providing liveable wages, along with better benefits and fair working conditions for employees, although “they have a lot less wiggle room than larger, industrial agriculture enterprises. And the challenge is when the farmers are working under the same conditions as their laborers.”

He added, “The way this needs to move is how we can get more people to understand that the price to grow food that’s healthy and fresh and sustainable for all of us is more than what we’ve been paying.”

Claire Hammonds of the Pioneer Valley Labor Center said the hope is to get a couple of farms involved initially to raise awareness among consumers and other farmers.

“Some farms are already largely meeting these standards,” she said. “But they don’t necessarily have these standards and these policies written down.”