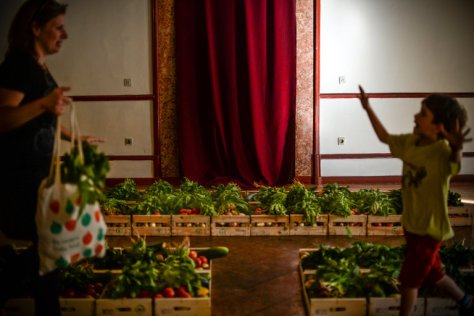 A customer shopped at Fruta Feia, a Portuguese cooperative created to sell imperfect food. The food industry has begun looking for ways to reduce waste. Bargain-hunting consumers seem to be going for the deals. Credit Patricia De Melo Moreira for The New York Times

Some food sellers, after decades of displaying piles of identical, aesthetically pleasing produce, are starting to sell slightly less beautiful — but still tasty — fruits and vegetables.

Millions of tons of food are thrown out or left to rot in fields every year in wealthy nations, simply because they do not meet cosmetic standards set by distributors or supermarkets. Under pressure from anti-waste advocates, the food industry has begun looking for ways to throw away less.

So now, in such cities as Pittsburgh and Paris, some of that imperfect produce has started to find its way into stores. And bargain-hunting consumers, who get a hefty discount for their willingness to munch on too-small apples and blemished oranges, seem to be buying it.

With the water, fertilizer, energy and other resources used to grow crops that never make it to the table, food waste carries an environmental price. In the United States, 40 percent of food, $162 billion worth every year, is never eaten, according to the Natural Resources Defense Council, an advocacy group, and ReFED, an anti-waste coalition. Producing, processing and transporting uneaten food accounts for a quarter of America’s water use and 4 percent of its oil consumption, the council says.

Along with targeting waste, being able to sell food that once would have been tossed aside gives growers a new stream of income and offers consumers a way to save money without compromising on taste or nutrition.

“There’s nothing more disheartening for a farmer than to grow something and then throw it away,” said Guy Poskitt, a carrot and parsnip farmer in Yorkshire. “Consumers hate waste, and as growers we’ve really got huge challenges in terms of profitability,” he said. Selling imperfect produce helps solve both problems, he said.

Often, the cosmetically challenged fruits and veggies are hardly distinguishable from ordinary ones — an orange with a bumpy scar on it, or a potato that is slightly smaller than its peers.

Dana Gunders, a food and agriculture expert at the Natural Resources Defense Council in San Francisco, recalled talking to a stone-fruit grower who every week produces 200,000 pounds, about 90,000 kilograms, of peaches and plums that cannot be sold. “He said, ‘Of those, you wouldn’t be able to tell me what’s wrong with eight out of 10 of them.’ ”

Abundance allows retailers in wealthy countries to be particular about aesthetics, and consumers have grown used to choosing from uniform rows of shiny red apples and perfect pears.

The industrial scale on which agriculture operates in many rich nations, and the long distances food often travels from farm to table, result in a great deal of waste. Retailers grade produce according to strict criteria to which farmers, fearful of shipping anything that might be rejected, must pay close attention.

“Sometimes it’s things like the cucumber is curved and so it doesn’t fit in the box as well as a straight cucumber,” said Ms. Gunders, author of the “Waste-Free Kitchen Handbook.”

Heather Garlich, spokeswoman for the Food Marketing Institute, a supermarket and wholesalers’ trade group in Arlington, Va., said sellers had an interest in making sure standards reflected consumer demand and that research showed shoppers choose produce based mainly on appearance.

There are some hints things might be changing. In France, the Intermarché chain of supermarkets started selling what it calls “inglorious” fruits and vegetables in 2014, at 30 percent off, with an advertising and social media campaign decrying the throwing away of good food. It began as a small-scale trial, but now all Intermarché’s French stores sell imperfect produce when it is available, said Elyse Barbé, spokeswoman for Groupement des Mousquetaires, which owns the grocer.

Asda, a British grocery chain owned by Walmart, began offering boxes of “wonky veg” in February, at 3.50 pounds, or$4.65, for five kilograms. They were such a hit with customers that the company announced the following week it would quadruple the number of stores involved to 350. Asda said the boxes would help avert hundreds of tons of waste.

Inspired by such efforts, Giant Eagle, based in Pittsburgh, in February put “produce with personality” on sale in five stores, at up to 20 percent off. “The customer response has really been positive so far,” so the number of participating outlets has since been increased to 21, Dan Donovan, a spokesman, said.

Hannah Husband, a movement and nutrition coach of Oakland, Calif., said that after she signed up for weekly deliveries from the company Imperfect Produce, she began recommending the boxes to her clients.

“A lot of times when you’re switching gears and trying to go to a healthier way of eating, it feels like everything costs a lot,” so the discounted prices are appealing, she said.

Most of what arrives on her doorstep is just a little bigger or smaller than standard, but every now and then something truly unusual shows up. Once, “I got an eggplant that had like a nose coming off of it,” she said. “It’s been fun to post pictures of the funny vegetables and then of what I make with it afterward.”

Fighting food waste has been moving up environmentalists’ agenda as a means of combating climate change. In addition to the resources used to grow it, uneaten food generates methane, a powerful greenhouse gas, when it rots in landfills.

The United States, where the Agriculture Department says 66 million tons of food go to waste annually, last year announced a goal of halving that by 2030. Europe has a similar target.

In poorer nations, where most consumers would not dream of rejecting good food based on its odd appearance, most food waste results from infrastructure shortfalls, like a lack of refrigerated storage or poor roads that make it hard to get crops to market.

Ben Simon, chief executive of Imperfect Produce, which ships aesthetically challenged fruit and vegetables to about 9,500 subscribers in and around San Francisco, said he was stunned to see the scale of waste at farms he visited in the state’s main agricultural region, the Central Valley.

“When you look out across a huge facility and see machines just dumping out kiwis or oranges that are perfectly good, or you look across a field of celery and see that almost 50 percent of it is left behind, it really makes you wonder what we’re doing, and why,” he said.

Ms. Husband, the Imperfect Produce subscriber, said she thought consumers were more open-minded than retailers had traditionally given them credit for.

“Because we’ve been herded into this idea that everything is uniform, of course we’re used to that,” she said. “But if grocery stores included more variety, I think people would absolutely accept it.”