Thousands of organizations seeking food system change have pointed out the negative environmental and societal consequences of our current system, which many say is propped up on “too big to fail,” hyper-efficient production. The often quoted, Nixon-era agricultural mandate of “get big or get out”—a widely attributed pivot point in American agriculture from a diverse family farming system to the current corporate business form—mirrored the business zeitgeist of the time, building on the mid-20th-century ideal of industrialization and globalization.

Other systems, including our energy, water, and transportation systems, also fell in line with that ethos; but unlike the food system, these sectors are undertaking 21st-century upgrades that comport better with our modern norms and realities by creating more decentralized systems that are better adapted to local geography and sociology. Food system change agents stand to learn from the public policy trajectory of renewable energy in particular. The renewable energy industry currently employs 6.5 million worldwide with $329 billion in investments in 2015, and a number of its effective strategies would adapt well to food system reform.

The starting point for renewable energy was the Public Utility Regulatory Policies Act (PURPA), enacted during the oil crisis of 1978. It opened the door to a new energy system structure by requiring that utilities source a percentage of their energy from independent producers. Building on that, many states later required metric-based targets (Nevada set an early example with its goal of 25 percent renewable energy by 2025) as part of a suite of policy tools supporting the development of renewable energy, called renewable portfolio standards (RPS).

This metric-based approach finds parallel in the food procurement power of public institutions. A national example is Brazil, which passed a law requiring that schools spend 30 percent of their meal budgets on food produced by the country’s millions of smallholder farmers. The program is credited with providing economic viability to that farm sector, through access to a guaranteed market in a direct relationship with government.

School food is also a large public food sector in the United States. The National School Lunch Program spends more than $11 billion annually to feed the 30 million children who qualify for free or reduced-price lunches. The USDA Commodity program provides an additional $200 million or so per year in supplemental food to schools. Given this, federal targets to support local farms in school food purchases would undoubtedly make a meaningful shift in supporting the local farm economy, bolstering its existing Farm to School technical support and grant program.

But such targets would address only part of the food system picture. Community and environmental health are also important parts of a modern food system. Metrics based on these values (such as targets for healthy corner stores, sustainably produced food purchases, and purchases of food from fair labor producers and suppliers) would drive healthy food access, economic viability for the range of participants in the food chain, and a system of agriculture that supports regenerative farming practices. 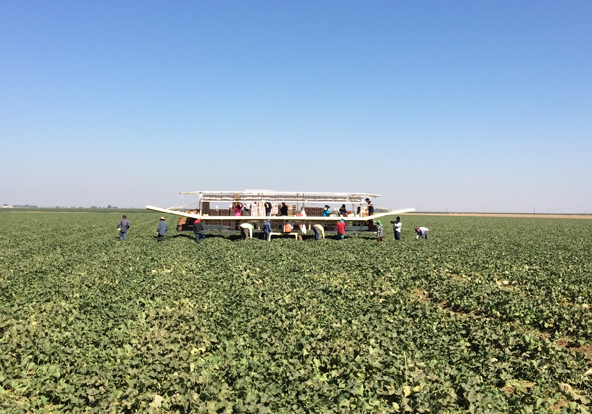 A number of food procurement programs already incorporate environmental sustainability values into their goals, including Real Food Challenge for universities and Health Care Without Harm for hospitals. The Good Food Purchasing Program is even more analogous to the RPS system, in that it targets the public procurement dollars of school districts and is metric driven, emphasizing in equal measure five core values: local economies, environmental sustainability, valued workforce, animal welfare, and nutrition. It is designed to work for the food system in the way that LEED certification works for energy efficiency in buildings; it has a flexible, performance-based set of guidelines within a metric framework, as well as a ratings incentive.

A region could leverage these program tools and others toward achieving food system goals. Such regional goals for school food, hospitals, military bases, and other publicly funded food programs in each area would create more than enough aggregate dollars to make a notable difference in the food chain. Nationally networked, regional procurement goals would also have a powerful influence on the federal role in the food system.

The generation of renewable energy accelerated when many states developed RPSs alongside federal and state tax incentives. The progress of these states toward their various mandated goals contributed to the current success of renewable energy worldwide. Target levels and motivations of each state vary according to their resources and attributes. For example, water-locked Hawaii is nearly halfway to the most ambitious goal in the United States: It plans to reach “100 percent renewable” by 2045. California recently upped its renewable energy goals to 50 percent by 2030, building on the success of its prodigious entrepreneurial ecosystem and diverse landscape in creating more than 21,000 megawatts of clean energy and 400,000 clean energy jobs.

Similarly, cities or states can become regional leaders of value-based food procurement goals designed for the characteristics of their area, and advance a suite of policies that would create a community of personal, environmental, and economic health in food. Cities are especially well-poised to do so: Most of the world’s population now lives in cities, and because city governments are closer to the ground than federal governments, they have a working understanding of the needs of their residents, and a better sense of the programs and processes that can work for them.

Of course, implementing value-based food system goals will require more than procurement metrics. We need policies and incentives to back them up. California is a good example. The state has consistently ranked first on the US Clean Tech Leadership Index, credited to the fact that it has the largest collection of clean energy policies and incentives (over 270, by some counts) backing its metrics. These include: rebates, low or no interest loans, loan guarantees, financing programs, tax exemptions, bonds, grants, favorable permit standards, access easements, building standards, zoning codes, and small business assistance.

An impressive number of food policies and incentives are already in place around the country. Pennsylvania’s well-known Fresh Food Financing Initiative, for example, became the basis for the small-market conversion programs in Philadelphia and the creation of Philadelphia’s Common Market food hub, a mission-driven, nonprofit aggregator of locally produced food distributed to schools, hospitals, and communities. And New York State recently gave a $15 million grant toward a $20 million food hub in New York City to implement its goals of supporting local farmers.

Another opportunity is to update tax incentives for food donations to extend to programs like Boston’s Daily Table, which addresses food waste and food insecurity by using otherwise unused, “imperfect” produce to prepare healthy food on a food stamp budget. California recently updated its agriculture tax incentives to include urban agriculture. Philanthropy, and local governments could also set up matching funds—modeled after the Veggie Voucher farmer’s market programs—for schools and small neighborhood markets that participate in values-based regional procurement programs. 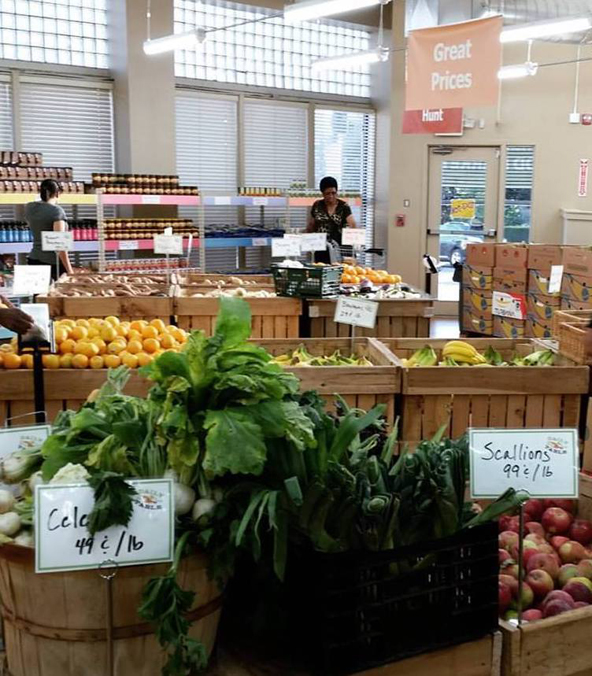 With regional metrics as an organizing framework, these programs and tools could become even more powerful drivers of food system design.

Affinity groups of cities can share best practices, operating as networked nodes of change. In 2005, Mayor Ken Livingston of London launched the C40, a network of the top 40 world cities that meet regularly to address climate change and energy efficiency. The group works to develop and implement policies and programs that generate measurable reductions in both greenhouse gas emissions and climate risks. When the C40 cities decide on a best practice—such as replacing incandescent bulbs in street lights with LEDs—they pool their combined buying power to create a bargaining block to obtain fair prices for both themselves and, because of the large size of the order, the manufacturer.

The Urban School Food Alliance, which includes the six biggest school districts in the United States, uses the same approach. In 2013, it asked tray manufacturers to develop a Styrofoam-free lunch tray. The manufacturers complied, motivated by the size of the order. This “alliance of alliances” between six cities represents 4,536 schools, more than 2.5 million students and 46 billion school meals, and a combined $552 million in food service. It has now turned its attention to the poultry supply chain with the aim of getting antibiotic-free chicken into schools. 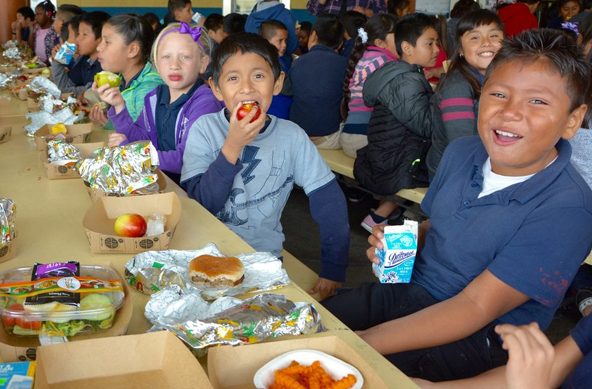 In one year after adopting the Good Food Purchasing Program, LA Unified School District went from less than 10 percent to an average of 60 percent local produce, creating 150 new jobs in food processing. (Photo by Jorge Gil)

As with renewable energy, regional metrics for food that support community, economic, and environmental health would strategically align policies, programs, and organizations toward those goals, as well as accelerate progress and encourage entrepreneurship. By turning the wheel of the existing system toward proportionally designed and well-supported regional targets, cities can lead a flexible, village-within-a-global-world framework that provides the responsiveness and resilience our communities deserve.