Join UMass Sustainable Food and Farming for a FREE and public screening of the short documentary “Brooklyn Farmer” which tells the story of Brooklyn Grange, a group of urban farmers who endeavor to run a commercially viable farm in New York City.

The film will be followed by a panel discussion with Dana Lucas (Freight Farms Boston and UMass Hydroponics) & Frank Mangan (UMass Professor of Urban Farming).

The film will be held in

Synopsis of the Film:

A focus of my program has been to evaluate production and marketing systems for vegetable and herb crops, with an emphasis on crops popular among immigrant communities. Since 2003, farmers in Massachusetts made more than five million dollars in retail sales of crops introduced from my program, crops that had not been grown in Massachusetts before. A majority of the research done by my program is at the UMass Research Farm in Deerfield MA. We also evaluate practical postharvest and pest management strategies for these new crops. Our program works closely with nutritionists at UMass to provide nutritionally balanced and culturally-appropriate recipes for these immigrant groups. This webpage provides information on the crops evaluated and introduced by my program: http://www.worldcrops.org/

Starting in 2011, we have begun to work with urban growers as part of an overall systems approach to provide fresh produce to urban populations. As part of this work we’re also evaluating the carbon footprint used to produce and transport fresh produce to urban settings. We have created a Facebook page to report on this work: https://www.facebook.com/umassurbanag

Dana Lucas
I am from a city and I cherish local food. I have found this appreciation for sustainable produce to be extremely helpful in my own personal development within controlled environmental agriculture.

I work for an urban farm that owns three Freight Farms. I have learned to successfully manage and market almost five acres of hydroponic produce. I also have recently created my own company for urban farm consulting. I design and build hydroponic systems for commercial and residential spaces around Boston, MA. I am most proud of recently receiving a grant to build and design a vertical farm on campus at UMass Amherst, which will provide hydroponic produce to dining halls on campus starting this winter. 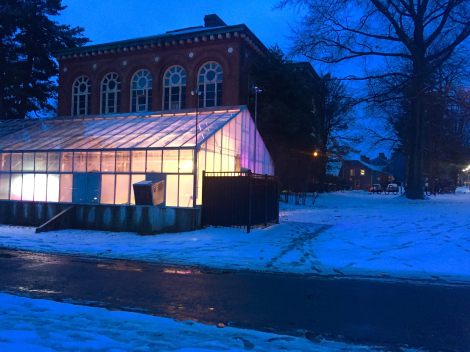 I believe the further expansion of city farms will help to give urbanites the opportunity to experience food systems more accessible. Completing my education in agriculture is extremely exciting and important for my career and our world’s future sustainability. I believe that urban agriculture will have a great influence on social, economic, and resource consumption problems.